I have terrible news to share from inner west Tokyo. This will be yet another summer of Crocs. You thought this ugly fad would have long passed, no? Recently I spotted Crocs worn by a yanki with gold lame accented sweats, as well as a rather stylish senior gentleman. The horror!

Still, I love the way this yanki is staring down my camera.

The mayor of Aso City stuns 20 year olds at Coming of Age Day (Seiji no Hi) by singing and pantomiming a hit from AKB48, the 4 dozen popular faux school girls who are Japan’s most popular band and advertising monster. The mayor’s singing and emoting strike a stern warning to the young things to never become adults. Poor 20 year olds of Aso City! (Source: Neojapanisme)

I had a much better time greeting and mingling with the 20 year olds celebrating today outside Nakano Sun Plaza. The girls were a riot of faux rabbit and pink/orange/red kimonos and complicated updoes. Many of the boys fried their hair and en-bigg-ed it, paired with shiny suits evocative of men’s host clubs and mid-tier salary men and occasionally traditional men’s kimonos, one in shocking pink. More pix soon. Here’s last years’ photos!

I also met a very handsome Korean photographer, and realized I wasn’t the only one who came to gawk! 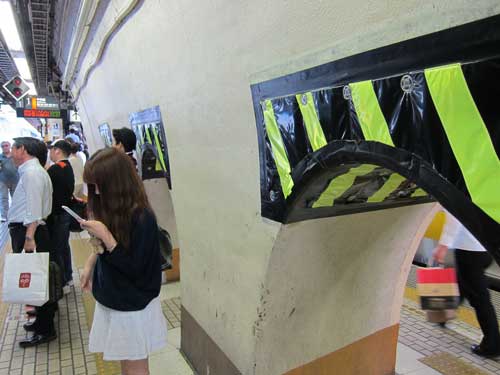 Maybe this counts as infrastructure moe. Where else but Japan would a ridiculously non-standard low arch be maintained in a public space with a crazy duct-taped fabric warning people to watch their heads?! It’s so bad, it’s superlative.