On January 2 and December 23, the Imperial Palace opens its moated gates to the public, who are given plastic flags that are later recycled. A mix of monarchists and the just curious are herded in front of the largest ceremonial hall to witness the emperor give a five minute speech where he solemnly informs us that he is praying for our health and for peace.

What of course no one tells you is that this is the ultimate police fetish event of the year! So many types to choose from: Palace guards, regular police, policemen on step stools (a personal fetish of mine), police in boats, black trench police in front of numerous buses, even some uniformed horse rider. Here’s some of my best shots. 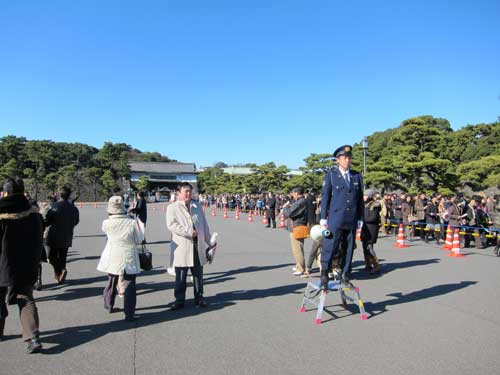 Many, many more police images after the jump. Mark your calendar for the next display of police authority!