Freaky insights include one lady recovering from childhood sex abuse who realizes that healthy Christian sexuality replaces personal satisfaction with satisfying your husband: “I’m learning the correct way of intimacy and bonds. It’s learning what your spouse wants, his needs.”

As Chelsea Handler would say, “America, you are one hot mess.” 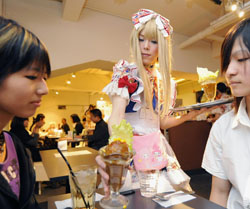 The Japan Times features a wonderful Christmas Eve story about the growing popularity of male maid cafes. What I love is that this trend of men assuming the maid costume is presented as having nothing to do with sexuality or gender identity.

1. Men like dressing as women, and it’s becoming more acceptable.

Behind this nascent trend, observers say, is that more men are beginning to enjoy dressing as a woman from a fashion viewpoint, and society is becoming more tolerant of the practice.

2. There are not enough women workers.

It started when one of the regular waitresses quit.

“Men who are not used to being served by women can feel relaxed and talk to the ‘maids’ easily because they are male,” said Chaan Sarin, who heads the cafe’s waitstaff.

4. For the maids, cross-dressing provides stress-relief from work. It’s only temporary, the girlfriend does not know, and this personal therapy will be ended with marriage.

“I become a totally different person to release my stress from work. I have the feelings of a man and I will quit once I get married,” he said.

Cashing in on this trend, Osaka-based Yu-time Publishing released the book “Otokonoko no Tameno Henshin Gaido” (“Guide for Boys to Transform Themselves”) in October 2008.

“People began to accept men dressed as women, saying it is OK as long as they are beautiful. At the same time, as there is more information nowadays on how to dress like women, men have gotten dramatically better at it.”

Japan has the most awesome combination of extreme kinkiness and feigned innocence. 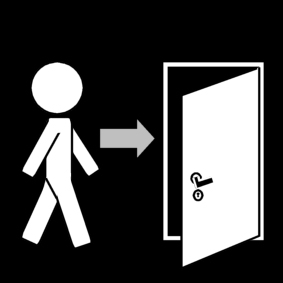 As many of my readers know, I am maintaining two blogs: this one about personal interests (ranging oddly from flowers to pottery to male hair and female geeks), and another about a public policy research project sponsored by a prominent foundation and corporation. I have purposely not linked the two blogs, so as to provide more freedom for me to write candidly about my thoughts and interests in this blog.

Prior to moving to Tokyo, I have always been out. Youthful activism and a hostile academic environment shaped my professional career in unexpected ways. It is ironic that the elite academic department that blacklisted me is one that claims a dedication to cultural relativism and openness. I have no regrets, and have been able to reclaim and re-purpose my academic training into a career first in industry and now in public policy.

Creating a new life in Tokyo presents new challenges to a queer identity. With no threat of anti-gay violence in Japan, the flip side is a complete expectation of heterosexuality. And, for the first time, perhaps because of middle age, a new environment, a desire to “be harmonious,” and the sheer quantity of new people I meet every week, I feel an unfamiliar hesitation to challenge conceptions when I am asking new contacts for help and orientation.

This has led to some awkward situations for me. END_OF_DOCUMENT_TOKEN_TO_BE_REPLACED