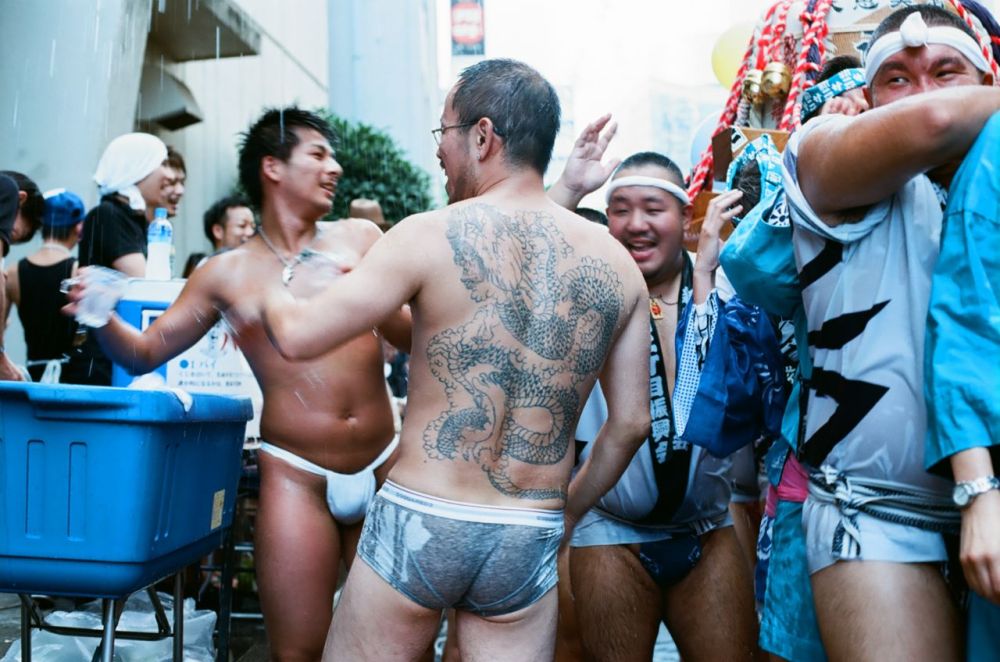 I don’t think so. 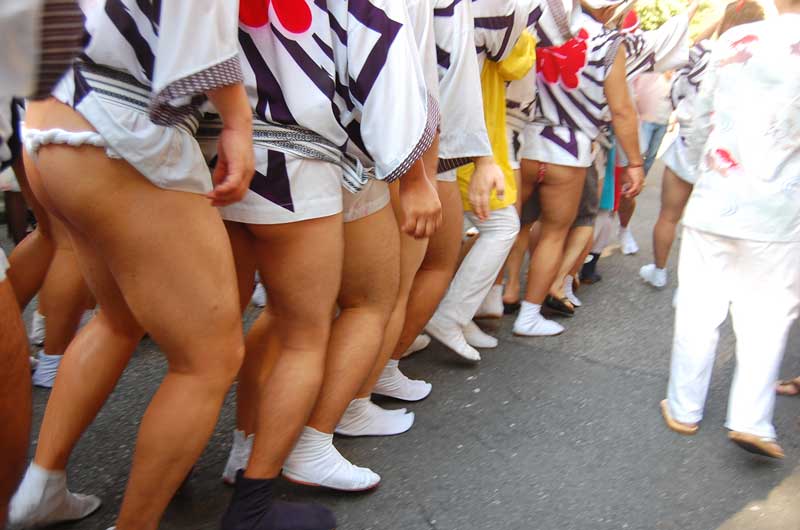 Is this the dictionary definition of freedom? It seems to make people and gods happy. 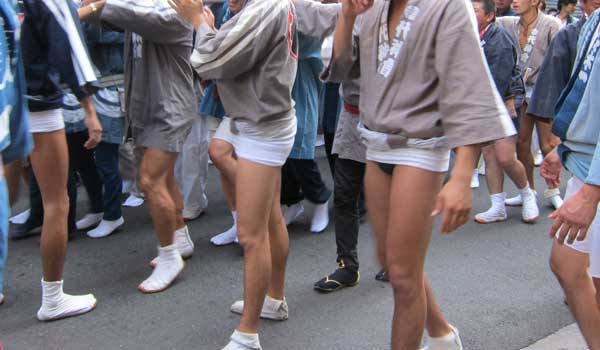 A friend of mine regularly participates in these shrine carrying rituals, every season except winter. I tried it once, but now it’s best to claim old age prevents me from lifting. I do, still, like to watch. 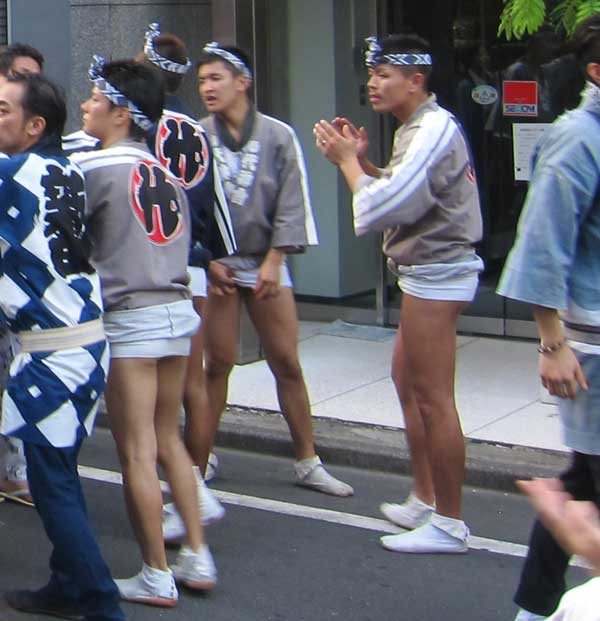 Fall in Tokyo means lots of Shinto street festivals. Nothing is more fun to watch than omikoshi, which involves mostly men carrying a heavy shrine, chanting, and showing off their asses. It is spiritual, pagan, collective, and super perverse. I’ll post some more photos in the next days.

The Rainbow Festival (レインボー祭り) will be held this Sunday, August 14, from 3.3o to 6 pm in Ni-chome. Last year was fun: lesbian omikoshi, men in fundoshi, and lots of yukata and daytime socializing. Tokyo’s gay district is almost always deserted during the day, so this is a special event. Who’s coming?

Ni-chome, Tokyo’s gay bar district in Shinjuku, hosted a summer festival, or omatsuri, the day after the Tokyo Pride Parade two weekends ago. Lots of color: traditional omikoshi, or portable shrine carrying; drag and summer yukatas; foreigners looking Japanese and Japanese looking foreign; some youths who look alien in their highly processed hair; an odd World War II cosplay (even more bizarre since the date was August 15, which marks Japan’s surrender); and a variety of frozen ice, giant sausages on sticks, and plenty of beer in cans. 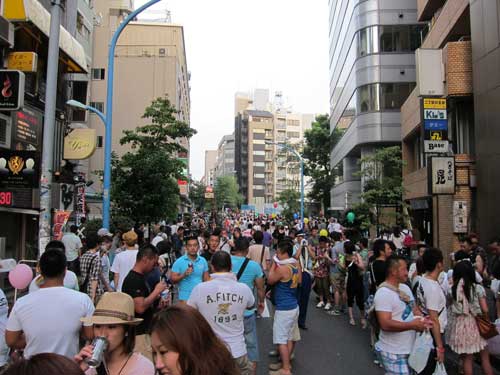 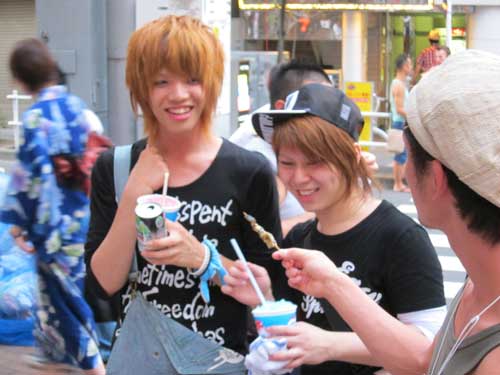 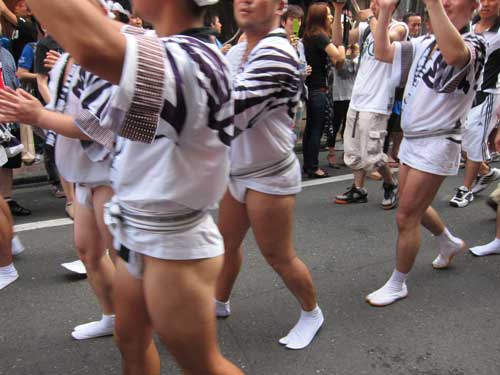 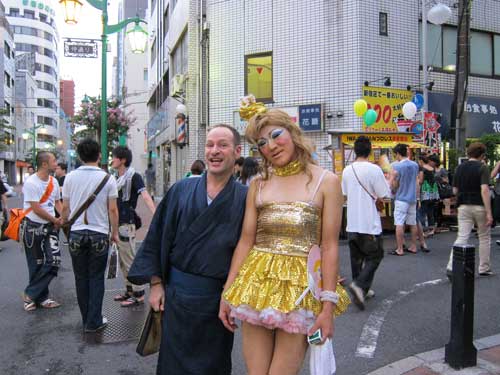 I will end this 3 part series on the Shinjuku omatsuri with this image of an omikoshi (portable shrine) being marched through Ni-chome. It was a fun crowd, part gay, part old-timer, part gay old-timer! I love how this ordinary street is transformed by mystical spirits and a sense of community and common purpose.

Just to keep on topic with Tokyo Moe, there was one ikemen photo I captured of the shrine. The husband saw the photo, and said, “he’s handsome.” Dunhh! I know! 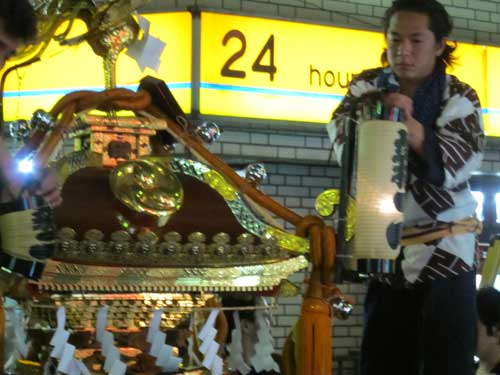 Last week our friend To., a culture-maker and neighborhood leader, invited me to participate in “Omikoshi” (御神輿). Of course, at the time, I had no idea what it was, so I said sure. The husband demurred somehow.

“Omikoshi” (御神輿) involves parading a super-heavy shrine around the neighborhood, amidst lots of chanting and grunting. For four days after, my shoulders have been bruised and sore. On the plus side, it involves group drinking, costumes, a huge communal dinner in the street, and some men wore “fundoshi” under their “hapis.” That basically means they are not wearing pants, although you only see the “fundoshi” when they’re sitting on the sidewalk (from the front, it looks like a colorful speedo).

The religious significance is, of course, lost on me. It reminded me of a a group version of carrying the cross, and something about “worshipping false gods.” As you can see in the above photo, it involved lots of sweating before the bruises appeared.

Also below, you can see To. leading the neighborhood kids in a preliminary event. 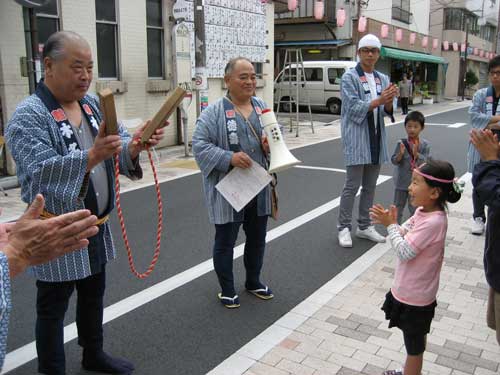 Here’s drinking mid-way with Ka. and Ya. (Yes, I am “experimenting” in my older years with legal intoxicants).

Finally below is a video of the final chanting, grunting and carrying. Thanks, Os. for the video!