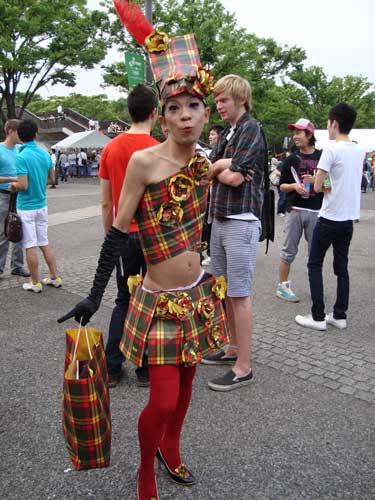 Yesterday was Tokyo’s Pride Festival, and this home-made couture costume of Isetan department store bags was the best outfit. The festival was small but lively, with a stage, booths, food, and lots of young people.

The stage show included a very large band with brass, wind instruments and percussion; Okinawan dancing and drumming; and a panel of celebrities being filmed for an NHK special on pride and being out.

END_OF_DOCUMENT_TOKEN_TO_BE_REPLACED 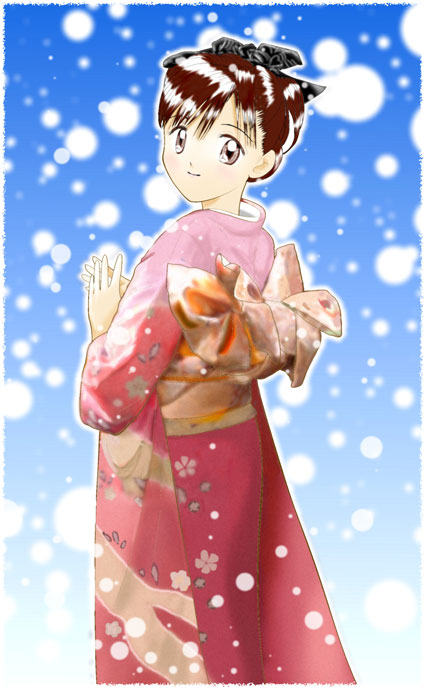 Happy Coming of Age Day (成人の日, Seijin no hi)! There are many strange official holidays in Japan: kids day (formerly boys day), sports and health day, for example. But Coming of Age Day is special– not only is all official business closed, but there’s the opportunity to see 20 year old’s dressed in their gaudy finest.

Some of the activity should take place in a temple or shrine. However, I saw dozens strolling in Nakano Broadway, take sticker photos, and showing off hair do’s. The best guy hair-dos I saw include blue-grey hair and one red-and-yellow mix.

I wasn’t sure what to say. Congratulations?! Now you can legally drink? You’re old enough to have carnal relations with adults? Could that hair be any bigger? The husband suggested I say nothing, and I obeyed.

I did have a fantasy of spotting in the crowds Mickey Rourke, with his bloated plastic surgery face, dressed up as a coming-of-age 20 year old. Are there other ojisan and obasan who take advantage of the holiday to pretend they are coming of age? I guess I have a few more years to plan my holiday outfit.

One of the pleasure of travel is not only the sites but seeing the other site-seers. In Kyoto, I could not resist taking photos of these two spectacles that nearly over-shadowed the historic sites.

Above at Kinkakuji, the Golden Pavillion made famous in the West by Mishima, my mother and I spotted this “uncle and neices” three-some. The unusually warm weather in December does not sufficiently explain the brevity of these skirts. My husband charitably claims that three-piece-suited gentleman could be the young ladies’ relative, although I suspect most ojisan in Japan or elsewhere would not enjoy escorting their siblings’ children in these outfits. On the other hand, if they are not relatives, what an odd choice of date location, no?

Below at Katsura Villa, this over-sized personality demanded the attentions and photo-capturing assistance of fellow tourists, tour guide, and even the gardeners. So demanding that we witnessed some fellow tour-goers loudly “excusing” themselves for getting in her way, and much eye-rolling from the Japanese tourists. I wonder if she used to be a show-girl. I was certainly captivated.

This is only included in this blog because it’s sooo gay and ojisan (おじさん). What could be more exciting than Liza Minnelli back on Broadway?

Bangin Sensei hedges his post by stating that this “brand-new genre of 萌え (moe) has come though I guess this is to be for women.” His definition must be quoted in full:

To get to the point, カレセン means to love a middle-aged man or even a bit old man. He wouldn’t even have to be that gorgeous and handsome, but gentle and good-hearted. If he seems to be a bit lonesome, it might be much better. I’d venture to say he would be a bachelor and…sorry for saying like this, but a ダメ男[dameo, sucker]. But I can ganrantee there are a lot of girls who love such a ダメ男.

Bangin Sensei also quotes a book titled Do you like オジサン(ojisan), which sums up the positive qualities of middle-aged men:

a. He can make the most of his free time.

b. He looks nice on the backstreet.

c. He prefers cats than dogs.

d. He prefers a bottle of beer than a can of it.

e. He must be drinking alone at his favorite bar. At a tiny little bar.

f. He is a kind of well-informed, but he is so modest.

g. He dosen’t follow women or money so much.

h. He accepts his age. This means he doesn’t try to look himself younger.

The range of sen and moe in Japan provide genuine “shock and awe.” As a middle-aged man, I wonder do karesen also include younger men? Other middle-aged men? Senior men? Can middle-aged men find admirers?