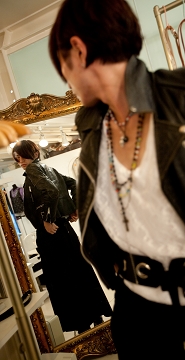 “Does this skirt make my butt look big?”

How is it that the wonderous Japanese male gender-bending, almost all in the name of heterosexuality, keeps getting bad press and moral condemnation. Another foreign article in Times Online profiles men who like to eat cake, a feminine past time, and dream of becoming house-husbands.

Rather than celebrate freedom and variety, the phenomenon of herbivores and ojo-man has alarmed sociologists who predict the demise of the Japanese nation. One pompous sociologist is quoted with this fearful prediction:

“I worry that herbivorous boys are the future of Japan . . . As young Japanese men become more timid and more averse to taking risks, it will affect the energy and vitality of the society.”

Who knew that a skirt and feminine aspirations could be such a powerful threat to the survival of a proud people? Are girly men Japan’s terrorism?

Update: CNNGo has a profile about Japan’s first men-only nail salon, in Osaka only for now.