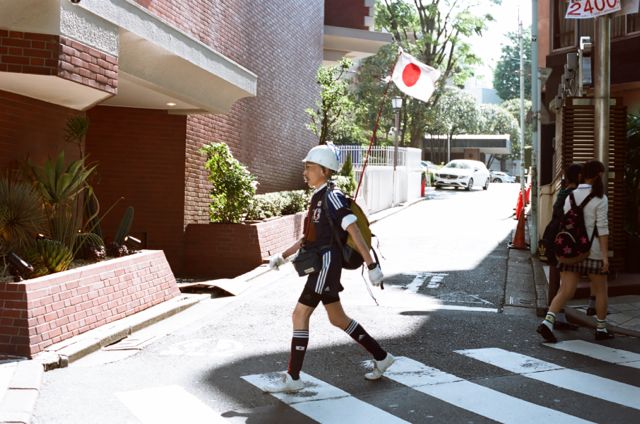 It’s Golden Week in Japan, and you see the flag displayed on the streets more than usual. Yesterday was Constitution Memorial Day, commemorating the adoption of the constitution imposed by the US occupation after World War II. Mostly I think Japanese aren’t thinking anything about the meaning of the holiday or of national identity.

Except for this senior citizen on Omotesando, the Sunday of the Rainbow Parade last week. Maybe a reader knows which national sports uniform he’s wearing? The giraffe like flag pole and the hard hat make his national pride compete with any teenage look. For the record, I don’t think he had any idea that it was Rainbow Parade day.

Lastly, I wonder what the school children think when they see senior citizens walking by in outrageous costume? Does it secretly give them hope that one day they, too, will allow their self-expression to blossom? 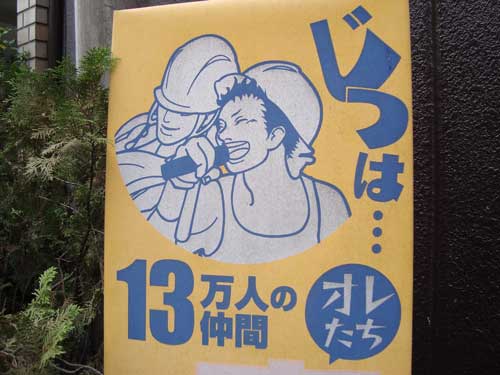 You don’t need to be Donald Richie— noted American film critic, high culture interlocutor, and lover of Tokyo construction workers– to swoon over this neighborhood banner celebrating the association of skilled laborers. In Japanese, they are called gatenkei no hito (ガテン系のひと).

What says solidarity more than singing karaoke in hard hats and head towels? The husband reminds me that skilled workers, like yakuza, have a reputation for chosen male families and gay sex.