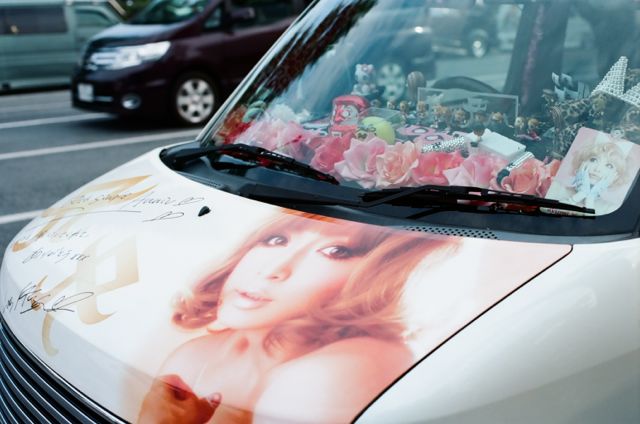 I heard that singer Hamasaki Ayumi is a gay-rights supporter, so I don’t mean to be harsh on her. But this image, plastered on a car hood outside Yoyogi Park, alternately fascinates and haunts me. I am amazed that such a pornographic look can circulate in public with no friction. Is this a day look? Should children see this?

I understand that the male gaze prizes artifice over reality, and that simple drag tactics are very effective in attracting male attention (big hair, heavy make-up, scary long nails, and a blank look). I am not shocked that these images are popular, but I am surprised to see them in the daylight and on the street.

The Japan Times features a wonderful Christmas Eve story about the growing popularity of male maid cafes. What I love is that this trend of men assuming the maid costume is presented as having nothing to do with sexuality or gender identity.

1. Men like dressing as women, and it’s becoming more acceptable.

Behind this nascent trend, observers say, is that more men are beginning to enjoy dressing as a woman from a fashion viewpoint, and society is becoming more tolerant of the practice.

2. There are not enough women workers.

It started when one of the regular waitresses quit.

“Men who are not used to being served by women can feel relaxed and talk to the ‘maids’ easily because they are male,” said Chaan Sarin, who heads the cafe’s waitstaff.

4. For the maids, cross-dressing provides stress-relief from work. It’s only temporary, the girlfriend does not know, and this personal therapy will be ended with marriage.

“I become a totally different person to release my stress from work. I have the feelings of a man and I will quit once I get married,” he said.

Cashing in on this trend, Osaka-based Yu-time Publishing released the book “Otokonoko no Tameno Henshin Gaido” (“Guide for Boys to Transform Themselves”) in October 2008.

“People began to accept men dressed as women, saying it is OK as long as they are beautiful. At the same time, as there is more information nowadays on how to dress like women, men have gotten dramatically better at it.”

Japan has the most awesome combination of extreme kinkiness and feigned innocence.