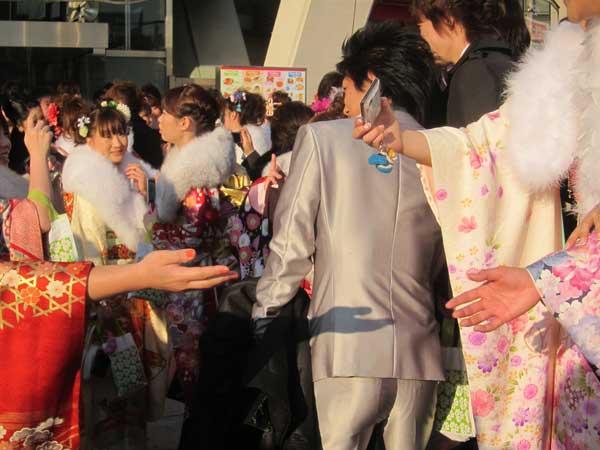 Definitely, Coming of Age Day is the happiest day of the year. Winter is never more festive.

First boy bands. Then electronics. And now masochism! Please leave just a little moe for Japan, too! It’s in German, but no worries. (Via Joe My God).

With those big boys grappling, there are bound to be injuries. This referee was knocked unconscious at the tournament going on this week and next in Tokyo. 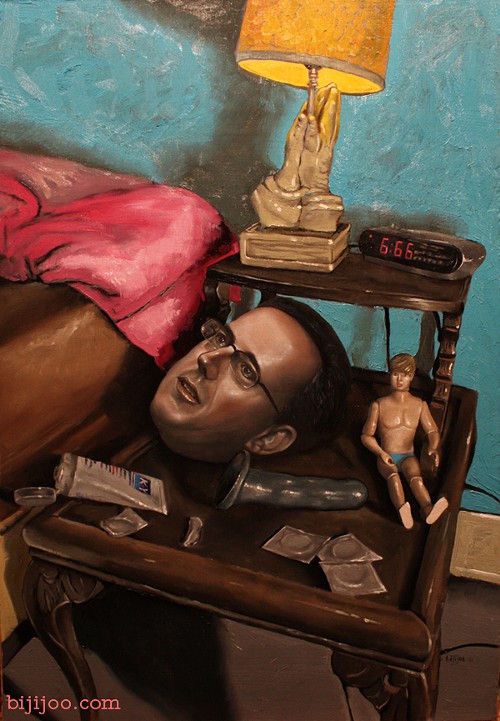 I am missing Michelle Bachman and Herman Cain. Maybe I should console myself with this lovely painting? Source: Savage Blog.

The mayor of Aso City stuns 20 year olds at Coming of Age Day (Seiji no Hi) by singing and pantomiming a hit from AKB48, the 4 dozen popular faux school girls who are Japan’s most popular band and advertising monster. The mayor’s singing and emoting strike a stern warning to the young things to never become adults. Poor 20 year olds of Aso City! (Source: Neojapanisme)

I had a much better time greeting and mingling with the 20 year olds celebrating today outside Nakano Sun Plaza. The girls were a riot of faux rabbit and pink/orange/red kimonos and complicated updoes. Many of the boys fried their hair and en-bigg-ed it, paired with shiny suits evocative of men’s host clubs and mid-tier salary men and occasionally traditional men’s kimonos, one in shocking pink. More pix soon. Here’s last years’ photos!

I also met a very handsome Korean photographer, and realized I wasn’t the only one who came to gawk!

After the weeks of muzak build-up, Japan retires Xmas with merciful speed. On the night of the 25th, the last Xmas cakes are discounted and forgotten. I kind of miss the US tradition of witnessing the first Xmas tree junked on the curb. The closer to the 25th the public abandonment, somehow the more worthy of attention. In Tokyo, I guess I can safely forget about the close association between Jesus’ birth and the by-reservation only consuming of fast food fried chicken. If any aficionados are reading this blog, please let me know how Mos and KFC and others compare.