On our recent trip to the “interior” of Japan, we rode a ferry boat with a grumpy pilot. We like to call him Captain Jamaica. He seems to share our love for plants. I love the orange leatherette, too.

Nighties are, by definition, more moe than function. The “I do love” introduction adds an extra frisson of perversion, and I can only wonder how the Ikuko nightie “satisfied you.”

You might not realize from reading my blog, but, yes, Japan has girls, too. I certainly appreciate female fashion, but it takes some extra originality and flair for me to strike up a conversation and snap a photo. These girls were dressed in super 80s neon to attend a concert by Okinawa alt rock band Orange Range. I am sorry I didn’t capture their pink sequined sneakers.

In true fan girl fashion, and being loyal to the theme of this blog, I can’t help but include a photo of the 5 band members!

Author Alexander Chee’s post in May about hot Korean stars, and People magazine’s error in misidentifying Rain as Karl Yune. Profiles and hot photos of so many over-the-top Korean male stars. My life will never be the same. 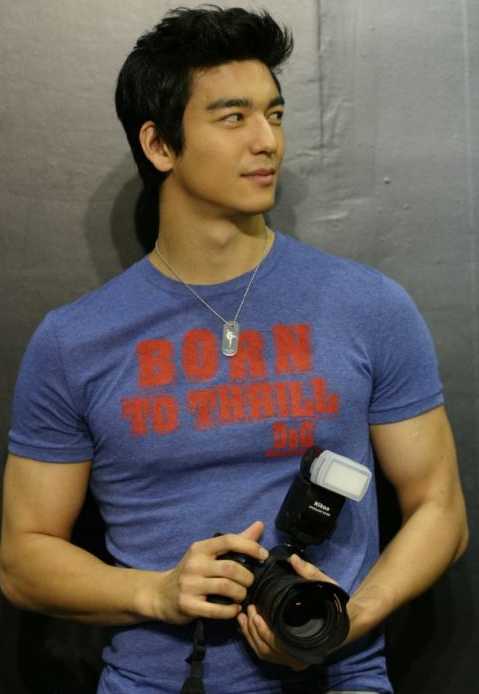 From Alexander Chee’s post: “People Magazine is catching a certain amount of flack this morning for having published an item that misidentifies a photo of Karl Yune as Rain, in the new Speed Racer film. Speed Racer, it’s worth pointing out, has 3 young attractive men of Korean descent on the cast, setting what might be a record for an American film (there’s no statistics on this).”

Last week I visited a beautiful historic town in the countryside. A mix of not being firebombed in World War II and some extraordinary historic preservation makes this town a magnet for Japanese and foreign tourists looking to experience Edo Japan. And then I stumbled upon this horrid Xmas store, and felt I had been instantly transported to any suburban mall in any town or city in Amerika. Major yucks!

Just returned from a trip to the Japanese countryside. The shinkansen or bullet train has speed and beauty. Seeing the pink and purple sky at sunset over the train is magical.

Only in Japan. A car named “Naked.”

A lovely photo by Annie Leibowitz from my favorite blog, mrs-o.org. And a gushing tribute to Mrs O in the New York Times Opinion section. Yes, Mrs O even double dutche jump ropes! 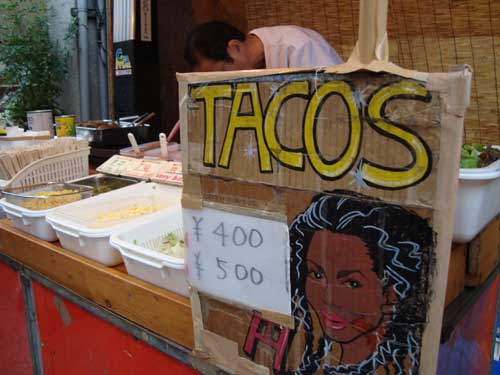 After a few street festivals, you think you’ve experienced the full range of street festival foods: hot dogs, okonomiyake, yaki soba, chocolate bananas, cotton candy, plum sweets, takoyaki, and increasingly kabab (what we would call shwarma). The recent festival we attended had some novelties including Mexican tacos and churros, and even bagel dogs. 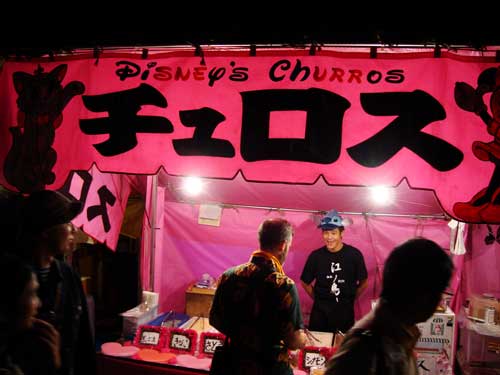 The churros had an unauthorized Disney tie-in. The bagel dogs were surprisingly spicy and delicious.

At a large suburban festival, we saw *three* booths involving boy bands. My favorite was the one above which involved a rifle shooting game, with the boy band images as either prizes or encouragements. This older guy looks ready to teach the kids how to shoot to kill. The guy running the game was kind of an ikemen, with his fried hair piled into a glitter sequin watch cap.

Below two booths sold boy band imagery. Interestingly, in Japan, there is no equivalent girl band objects. I guess Japanese (male loving) women are just lucky in that respect. I also suspect that the imagery objectifying women is perhaps too dirty to be shown in public at a festival.

And still more. Plus there was a Korean store full of Korean bands and idols.