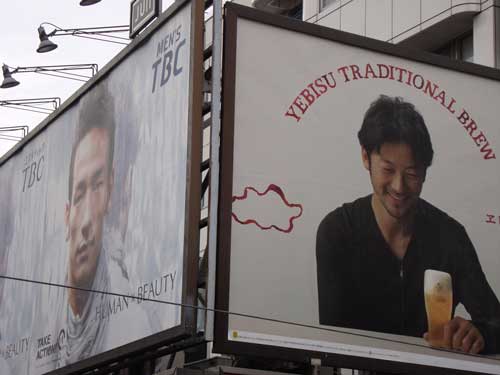 Imagine my delight standing on a JR platform and seeing two of my favorite ikemen together, Tadanobu Asano and Nakata Hidetoshi.

I wonder if I am having a drink with Asano, will Hidetoshi see me from the “human beauty” clinic? Will they fight eachother for me? Can beer and beauty co-exist?

As the world economy spreads gloom and fear, the United States is once-again pre-occuppied by Japan. After the 90s when Japan’s bubble burst, the OOs saw Japan  eclipsed in the United States imaginatin by China, as well as India, Russia and Brazil. Now, Japan is back as the dark side of what might happen to the United States economy.

Today’s New York Times featured Nakano housewives, and documents their frugality to offer “a peek at how thrift can take lasting hold of a consumer society, to disastrous effect.” Efficient and eco-conscious activities like re-using bath water for clothes washing, shunning conspicuous consumption, and purchasing fewer cars are portrayed in this leading United States media as creating a “second Lost Decade”, this time of lost consumption.

Can we really not imagine a global economic recovery without United States wasteful consumerism and its worldwide suppliers? Is there no room for re-use, recycling and barter? Is the mall the only pathway to healing?

Nothing quite says “I love you” like a Valentine’s Day, heart-shaped pork bun (肉まん). Sure looks tasty!

New Berlin, Wisconsin, the New York Times and apparently the international media are ga-ga over the news that a high school boy tricked 39 male classmates into sending him naked photos by posing as a girl on Facebook. He then threatened to make public their naked photos and videos, and blackmailed 7 of them to have sex with him. Apparently this news has made it even to the Taiwanese media, since I first learned about it last week from my SF acupuncturist.

I love how the media is in a tizzy since it involves homo sex. Since they were all under-age, it hardly seems like a sex crime. And no one seems to question why 39 male high school students so willingly sent naked images of themselves to a Facebook “friend” they apparently did not know. Rock on, you clever, dirty high schooler.

Although the designers are European and American, there’s something uniquely Tokyo about the male embrace of full-body pink. And I love how the fashion and models pop in front of everyday Tokyo streetscapes that are both ugly and evocative of my favorite mega-city.